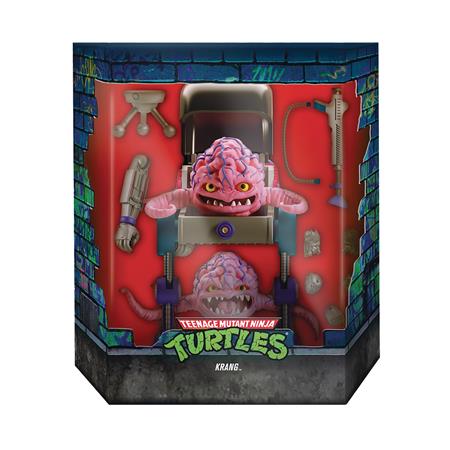 From Super7. The fifth series of Super7's Teenage Mutant Ninja Turtles ULTIMATES! figure line adds four more characters fans will want to collect! It's not all fun and games being a Teenage Mutant Ninja Turtle, and Leonardo leads by example as he and his brothers take on crime in the big city, armed with accessories including his Wacky War Banner, Samurai shield & sheath, a slice of pizza, and a weapon rack with his shuriken, kunai, samurai claws, and katanas! A marine biologist turned mutant manta ray, Ray Fillet is always someone the Teenage Mutant Ninja Turtles can turn to when they're literally in over their head, and fortuntely he comes with alternate heads and hands and a weapon rack including an anchor, Scarfish, and his Ray Gill Gun. When they were handing out Southern charm and hospitality, Leatherhead must have been out in the swamp, because this gator wants nothing more than getting revenge on the Ninja Turtles with alternate hands, his Jumbo Gumbo Belt, and a weapon rack with his Fly Fishing rod, Turtle Trap, and Swamp Gun! While evil warlord Krang may look relatively harmless in his bubble walker, his plans include nothing less than world conquest! Each of these made-to-order 7' fully articulated ULTIMATES! figures come with accessories and will be great additions to your collection.