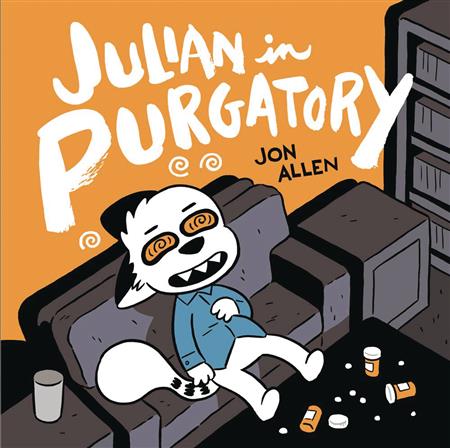 Eternal screwup Julian has burned his last bridge in his small Midwestern hometown and he's on the streets, broke and alone. When a poorly thought out drug heist goes as badly as you'd expect, he's forced to confront his demons and decide if he truly wants to stay in this self-made purgatory forever. Julian is going to change his life! Get off the couch, get a job, stop disappointing everyone he loves. But first: maybe a couple of pills? Being the mayor's son comes with a lot of pressure: pressure to conform, perform, and live up to expectations. But Julian's opting out of it all. He's living on his girlfriend's couch, dealing drugs, and watching the days pass, empty and unfulfilled. It . . . wasn't too bad, to be honest. At least, not until Dana flushed his stash and booted him to the street. Alone, adrift, broke, and jonesing, Julian has burned his last bridge, his schemes have gone from 'moronic' to 'tied up in an abandoned mine shaft,' and the tiny town of Piney Bluff is swiftly running out of safe harbors for its most fortunate son. It's time for Julian to take some steps, but first he has to find a way out of purgatory. An awkward, wince-worthy, and hilarious companion piece to creator Jon Allen's previous work, The Lonesome Era, Julian in Purgatory is a wild safari through one kid's bad choices and worse consequences.